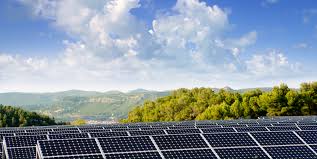 Solar energy is a growth industry worldwide, and thanks to the public’s interest in environmental sustainability the future of this clean, alternative power source is as bright as … well, the Sun.
In Tracy California solar’s fortunes are soaring, and All Air Heating and Air is proud to be at the forefront of this exciting development. Fantastic things are happening here with solar, and you may be surprised to discover how rapidly the pace of change is accelerating.

Solar Energy in Tracy California is Here to Stay

Residential and commercial solar power has officially arrived in the Golden State, as the following facts demonstrate:
Fact #1: California leads all other states in solar energy production and installation, and its edge in this area is significant.
Fact #2: After bringing an additional 3.266 megawatts online in 2015, California is now harvesting enough solar energy to power more than 3.3 million homes.
Fact #3: Prices for residential solar energy in California, and nationwide, are plummeting: in just the past five years the cost of a solar photovoltaic system for home use has dropped by 48 percent.
Fact #4: In 2014, California governor Jerry Brown signed an extension of a statute that allows homeowners to install solar panels for electricity generation without facing an adjustment on their property taxes. This tax break is guaranteed to stay in place until at least 2025.
Fact #5: Over an expected 25-year lifespan, a 4.5 kilowatt residential solar system installed in the typical California home can produce enough clean energy to offset the emission of 278,000 pounds of carbon dioxide (the primary driver of man-made global warming).
Fact #6: Real estate professionals in California estimate the installation of a small 3.1 kilowatt solar photovoltaic system will raise the final sale value of a medium-sized family home by more than $18,000. And of course larger solar power installations will raise the value of a home even more.
Fact #7: Under its Residential Renewal Energy Tax Credit program, the federal government allows homeowners who install solar photovoltaic energy systems to cancel up to 30 percent of their final tax bill. This is not an tax deduction but an actual rebate against taxes owed. This program was originally supposed to expire at the end of 2016, but the credit for solar energy installations has been extended for three more years.
Fact #8: Through it local electric company, the city of Lodi (All Air’s home base) is now offering a rebate for customers who install solar power on their properties. Up to 50 percent (or $5,000, whichever comes first) of the total cost of a residential system will be covered for successful rebate applicants, and while the program is closed for 2016 it will be accepting fresh applications from Lodi residents again in 2017.

People in the know are intrigued by the promise and potential of solar energy, and that includes everyone at All Air Heating Air Conditioning And Solar.
California consumers are leading the nation’s movement to solar and we are excited about a future that is arriving must faster than most expected. As leaders in and supporters of the solar revolution, we are pleased to offer expert solar sales and installation services to our customers in Lodi, Stockton, Elk Grove, Tracy and surrounding communities.
If you’re ready to explore the solar option we invite you to contact us today to get the discussion started. We’ll answer all your questions and give you all the information you need to decide whether solar energy is the right solution for you.